Things have been moving so quickly with the film that it has caught me quite off guard.  This being the first full length documentary I have ever made…I really thought that once  screened the first time I would say to myself, “job well done”…and walk off into the sunset, moving on to the next project.  Not so!

I have ended up almost as busy as I was when editing and filming.  The film turned out to be more of a platform than I hoped it would or could be for people to really grasp just how valuable a resource Bolin Forest and creek are as a watershed.  There are now over 6 screenings in the works in the upcoming month alone and it is also now going to be seen by UNC students as well as in two different area high schools.

In brief, things are going quite well!

At a private screening a local resident held at their home yesterday (Sunday), two of the people I interviewed from the film were on hand to actually take the viewers down on the creek itself to have a firsthand look!  Here are some photos captured of urban stream ecologist, Mike Paul, sharing some knowledge along Bolin Creek.  The photos were taken by Mary Sonis, who is also a bird expert and forest photographer extraordinaire…and she too is featured in the film along with many of her great pics. 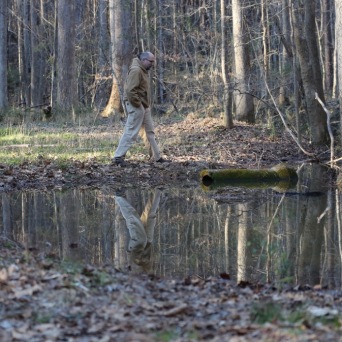